After months of separation Patrick and Mimi amicably agree to a quickie divorce, but they get a nasty shock when it’s revealed their marriage was never legal. Mimi flies into accusations and recriminations holding Patrick to blame. She then hatches a plan to secretly marry and divorce legitimately in order to save the souls of their children who were born out of wedlock. Everything is in disarray, and Patrick is due to leave for a new business venture, but the mission to re-marry brings up memories of the past and unearths their true feelings. With his parents apparently divorced, Micky feels orphaned and bitter about his relationships. In an effort to cheer him up, Maxine and Ian treat him to a night out where he meets a guy, Gary. Their connection restores his faith until he discovers their bond is built on secrets and half-truths. Micky must decide whether to bare the burden of his own lies or if honesty is the best policy. Patty sets Frank up on a benefit scam, landing him behind bars. But when Libby learns the truth, she rails against a righteous Patty in order to raise bail and free her love. 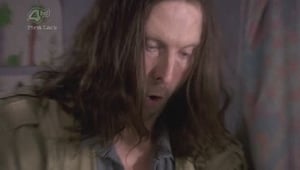