In an attempt to build up some confidence, Ian joins the local boxing club and quickly strikes up a friendship with the owner, Jock. But when the club faces closure due to Jock’s debt with Paddy, Ian enlists Maxine, Carl and Chesney to help raise funds. However, it soon becomes clear that Ian has stumbled into a hornet’s nest of unfinished business between Paddy and Jock. Meanwhile, a moment of heroism prompts Mickey to apply for a job with the fire service, but during the assessment he is haunted by old doubts. Returning a failure, he feels wounded, but his handling of a life-threatening emergency proves that he deserves respect. At the Gallaghers’, Libby’s biological clock is in overdrive, and to Frank’s utter horror she makes it clear she wants to have children of her own before it’s too late. Elsewhere, Liam is targeted by bullies, while Karen sets up a Chatsworth’s Got Talent night at The Jockey. 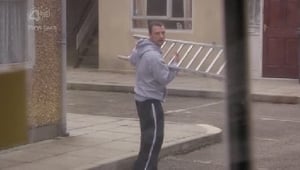