Ladies Night at the Jockey proves to be more trouble than its worth. For one thing its full of blokes which only serves to anger Jez. Fiona eyes up footballer Ryan but when she wakes up the next morning it isn’t Ryan who is lying next to her. Instead its the less-than-desirable Joey Dawson. Fiona decides to take contraception but before she can actually take them Liam swallows them and then Marty traps Joey’s arm in a door. At the hospital they discover that Joey’s arm is broken but Liam is fine and there will be no ill effects. A follow up visit from social services isn’t as simple for the Gallagher family. The inspector is Katrina a woman who went to school with Fiona and who’s life was apparently hell because of Fiona dubbing her “Sperm Whale”. But the family pass the visit but Katrina reveals she’s engaded-to Joey Dawson. At the Jockey Joey confesses he loves Fiona while Ryan lets slip to Katrina that Fiona and Joey were all over each other the night before. 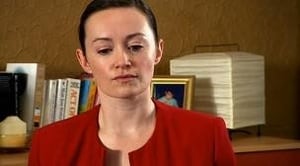