After Captain Stottlemeyer is shot in the shoulder by an unknown assailant, a somewhat rattled and very angry Disher is left in charge of the investigation. Although Monk is almost as distressed as Disher, he provides very little help with the investigation, even allowing a suspect to get away. Feeling depressed and helpless, Monk decides to try a new medication that controls his OCD and eliminates his phobias but also makes him insufferably egotistical, unempathetic, and oblivious to the details that are so vivid to the “”normal”” Monk. Meanwhile, the suspect Disher has been pursuing is proven innocent, and the bullet taken from the captain’s shoulder is traced to a gun belonging to a dead woman. Stottlemeyer impatiently checks himself out of the hospital with his arm in a sling and arranges to interview the new suspect with the help of Monk, Sharona, and Disher. Monk arrives late, dressed in a loud Hawaiian shirt and talking like a “”cool cat”” from the 1950s. “”The Monk,”” as he calls him 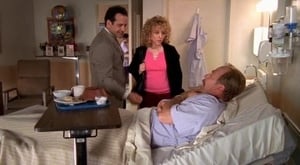