Mr. Monk and the Game Show

With Sharona in New Jersey to visit her ailing mother, Monk is left in the very incompetent hands of his annoying upstairs neighbor, Kevin Dorfman, but the prospect of a week with Kevin is eased somewhat by a visit from Trudy’s father, Dwight Ellison. Dwight invites Monk (and Kevin) to spend the week with him and his wife, Marcia – and at the same time investigate gameshow host Roddy Lankman, who appears to be involved in a conspiracy to allow one of his contestants, Val Birch, to win every game. Despite the memories of Trudy aroused by spending time with her parents in her former home and the questionable help of Kevin, Monk discovers evidence that Lankman visited Birch’s house – and that Birch visited the site of the accident that killed Lankman’s assistant, Lizzie Talvo. To discover exactly how Lankman and his crooked contestant are communicating – and possibly prove that they’re involved in something much worse than cheating – Monk becomes a contestant on the game show. His knowledge o 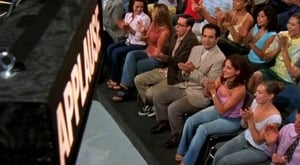