Mr. Monk vs. the Cobra

When John Ricca, author of a controversial and unfavorable biography of martial artist Sonny (“”the Cobra””) Chow, is found dead in his home, all the evidence points to Chow as the murderer. Unfortunately for Captain Stottlemeyer, his chief suspect has been dead for six years. While Monk and Natalie (who’s more interested in being reimbursed for her business expenses than in solving the case) visit Chow’s former teacher, Master Zee, who claims that Chow died in his arms, Stottlemeyer resorts to having the corpse dug up to prove that, despite rumors to the contrary, Chow is indeed dead. A dental X-ray proving that the corpse is Chow leaves Monk to figure out who tried to frame the dead man for murder. On an inadvertent tip from Disher, an avid Cobra fan, Monk and Natalie visit the Sonny Chow museum, where Monk finds two important clues–a hairbrush that has been stolen from its case and replaced with a lookalike and the stamp that the museum proprietor placed on Natalie’s hand so that she 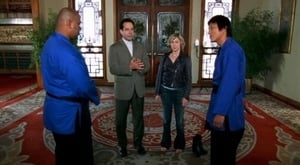