Monk and his friends go to New York City to discover the connection between Trudy’s murder and Warrick Tennyson, whose name was given to Monk by Dale the Whale in last season’s cliffhanger, “”Mr. Monk Goes to Jail.”” As they’re checking into their hotel, mayhem breaks out in the lobby and three people are killed, including the Latvian ambassador to the United Nations. Monk quickly discovers that the ambassador’s coat is wet–an odd detail because minutes earlier he was standing near Monk in a dry coat. Monk provides a police sketch artist with minute details about the perpetrator’s left ear–the only part of his face that wasn’t covered–and Stottlemeyer pressures the New York police captain to allow them access to Tennyson in exchange for their help in the new case. However, the DA, for reasons of her own, is blocking their access to Tennyson, and only after Stottlemeyer “”borrows”” the keys to the captain’s office and pulls out the file that he saw Captain Cage hurriedly stuff into the b 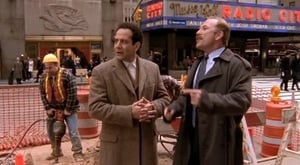