When a friend’s college-age son dies mysteriously in Mexico, the mayor sends Monk to investigate. Doubting the coroner’s report that the young man “”drowned”” in mid-air, Monk nevertheless has difficulty concentrating on the case. His eighteen suitcases carrying not only his clothes and “”back-up pillowcases”” but a year’s supply of food and his favorite brand of bottled water are stolen, leaving him with nothing he considers safe to eat or drink. Even worse, someone is trying to kill him, first by running him down with a pick-up truck and then by planting an explosive device behind a picture that he compulsively straightens every time he enters his room. Neither the witnesses nor the police, a south-of-the-border caricature of Stottlemeyer and Disher, offer any helpful leads–except for the mention of another unsolved murder, this one a mauling by a “”wild lion,”” the previous year. The fact that both victims were from San Francisco offers Monk the clue that he needs to solve the case and e 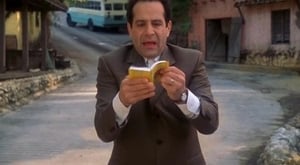