Mr. Monk Goes Back to School

When English teacher Beth Landow falls from the clock tower at Trudy’s former high school, the assistant principal doubts the police department’s conclusion that the death was a suicide and invites Monk to investigate. Monk quickly concludes that the suicide note is a forgery: a highly respected English teacher wouldn’t confuse “”its”” with “”it’s.”” A few words with the teachers in the lounge lead him to suspect that the murderer is a science teacher, Derek Philby. Unfortunately for Monk, Philby was proctoring an SAT exam when Ms. Landow’s body landed on Philby’s car, setting off his car alarm and alerting the entire school to her death. Armed with a strong suspicion but no evidence, Monk becomes a substitute teacher in hopes of finding the information that will incriminate Philby, who arrogantly informs him that he’s “”failing the class””–he has no evidence to support his hypothesis. Faced with students who throw erasers at him, an irate father who is also the school’s gym teacher threat 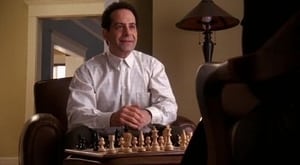