On 9 August 2007, Air Moorea Flight 1121 crashes shortly after taking off from Moorea Airport in French Polynesia. All 19 passengers and the pilot died. The cause was a badly worn and partly broken elevator control cable failing completely in flight. It was put under more strain than it could handle as the force on the elevators changed with flap retraction. The situation was likely aggravated by the aircraft being repeatedly buffeted by jet exhaust while parked, stressing the cables further. 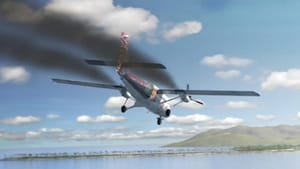