Titanic in the Sky (Qantas Flight 32)

On 4 November 2010, Qantas Flight 32, en route to Sydney Airport in Australia, suffers an uncontained engine failure in its number two engine and serious damage to its left wing shortly after takeoff from Singapore. The crew members overcome a number of resulting failures and make a safe emergency landing back at Singapore with no injuries among the 469 passengers and crew members. Investigators found that a manufacturing fault in an oil pipe caused the engine failure. 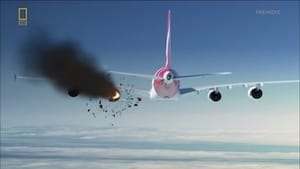