On 19 July 1989, the tail-mounted number two engine of United Airlines Flight 232 explodes, causing serious damage to the aircraft’s hydraulic systems and leaving the flight controls unusable. By varying engine thrust, the pilots manage to crash-land the aircraft at the Sioux Gateway Airport in Iowa, saving the lives of 185 of the 296 people on board. The investigation traced the engine failure to a fatigue crack in the front fan disk which had developed from a defect introduced before the disk was even made, when the original titanium ingot used to make it was formed. 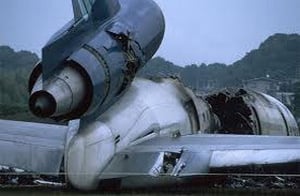