On 8 October 2001, Scandinavian Airlines Flight 686, carrying 110 people bound for Copenhagen, Denmark, is taking off at Milan’s Linate Airport in thick fog. On the runway, it collides with an Air Evex business jet carrying four people bound for Paris, France. The airliner suffers major damage and crashes into a building shortly afterwards. All 114 people on board the two aircraft are killed, along with four on the ground. The crew of the business jet had made a wrong turn while taxiing in the fog and inadvertently taxied onto the runway. 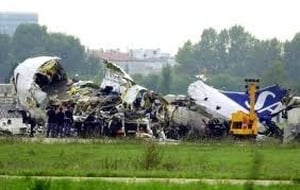