Everything begins to come together in this episode. Hohenheim has confronted Dante and the Homunculus, but he was taken by surprise when the Homunculus of his former wife appears, and he is captured by Dante and sent to the other side of the mysterious gate. Mustang confronts the military court, not about the Fuhrer yet, but about his secretary Juliet Douglass. His words revealed him to the Fuhrer, who orders him to the front lines on the north, to make it easy to dispose of him when the time comes. Ed and Al are on the run, disguising themselves. They don’t make it very far before being discovered, but they were far enough for Ed to find Sensei, who knows of his plans when he asks for a piece of her child’s corpse. Al, trusted to stay in hiding, of course runs off and meets with Tucker. He reveals Nina’s motionless body to Al, who is taken by it, and offers to use himself to help her. 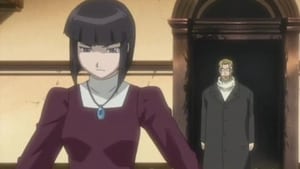