His Name Is Unknown

Al’s body has been transmuted into a bomb by Kimblee just before his death, and Scar, in a fit of compassion, prepares Al to be saved by turning him into the Philosopher’s Stone. Scar sacrifices his right arm, melding it with Al, and making Al a container waiting for the army’s invasion of the city. Ed manages to fight off the two homunculi and with Ryla and Rose, they escape, but Ed knows he has to go back, and returns to the city. Mustang, using information gathered by Armstrong in his mock service of Archer, goes down to Tucker’s research room to put a stop to the madness. They are beset by chimeras and though they have little trouble fighting them off, Archer gets away. Before anyone can stop him, he sends the army into Lior. There Scar sacrifices himself to transmute the army into Al’s body, making him the Philosopher’s Stone. 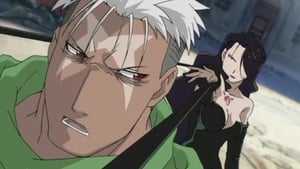